Video Tour of Our Tricked Out LandCruiser

We made a video for you!

Many of you have asked about the vehicle we'll be traveling in, so we made a quick video of how it's set up and all the cool gadgets that are included.

We left Johannesburg (and our amazing friend Gavin) on Sunday, with the goal of reaching the town of Kuruman in the early afternoon.

One of the biggest challenges we had before we left was not really having a clear understanding of how long it will take to drive from camping spot to camping spot. Yes, we researched the distances but this is Africa - road maps mean nothing! Sometimes you come to a road and it doesn't exist anymore, or you find a brand new road that's much faster. We've been running into a LOT of construction - Asa has been doing an incredible job of maneuvering considering that this is a huge, heavy vehicle, the cars drive on the left, and the driver's seat is on the white. There's been a little bit of white knuckle driving in the dark (because there are people, bicycles and animals walking along the road) but for the most part we've been doing great.

Asa's been doing most of the driving but I took a turn learning how to drive stick with my left hand.

After an overnight stop in Kuruman, we drove to Augrabies Falls National Park - the sixth tallest waterfall in the world. 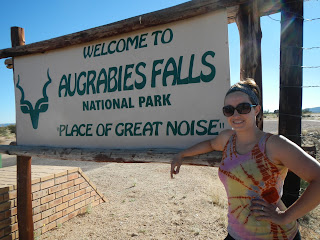 We found a campsite and settled in, then went for a walk along the falls.


There were at least 6 viewing platforms for Augrabies Falls - it's a pretty fancy campsite with a reservations only restaurant, laundry facilities, and even a bathtub in the bathrooms.


It was a full moon night, so we headed back to the falls and the viewing platforms after cooking dinner so Asa could play with his new camera.

In the morning, we wanted to get up early and hit the road, but ended up sleeping in until 9! It was the first morning we were able to relax a little, and we both really needed the sleep. We got up and made camp quickly because baboons were starting to head into camp (a common problem in this part of South Africa) and we didn't want them messing with our food or stealing our sunglasses.

Our goal was to reach Namibia by the end of the day, but that plan was derailed when the turn signals in our car stopped working. We called the rental company who told us to stop at the Toyota in Springbok. When they couldn't figure out what was wrong, they escorted us to an electrical specialist. The mechanic looked at the car for about 2 hours, and then said that he couldn't figure out what was wrong. Believe it or not, when we tried the signals again, they all worked! He must have knocked something into place.

We're heading to Namibia today to check out the Fish River Canyon and to spend an evening at the Ai-Ais Hot Springs - we're ready for a nice, hot soak in the 60 degree celsius springs.

Internet has been spotty and not very strong signals, so we'll do our best to post when we can. We're having a GREAT time and can't believe we are so lucky to get to do this. Love and miss you!

We arrived in Joburg last night, and were picked up at the airport by our friend Gavin. We met Gavin and Dia when we were on our honeymoon in SE Asia - we happened to be seated at the same table during our resort's Christmas pageant on Koh Samui, and we've been friends ever since. We visited them in June 2010 when we were in South Africa to go on safari, explore Cape Town and the Wine Lands, and see a few World Cup games.

Gavin took us home and made a great chicken soup for us. It's winter in South Africa, which means it's warm in the daytime (around 70 degrees) and freezing in the evening (seriously freezing - it's going to be below 30 tonight). After a few glasses of wine, whiskey, and a shot of Jaeger, we fell into bed.


We pick up our LandRover tomorrow, which includes a 2-hour orientation on how to work everything. We'll post more later. Love to you all!

P.S. If you want to see our blog from our honeymoon, go here: http://asaandjulia.wordpress.com/.

I seriously hope we get to swim with baboons like these lucky people in Namibia:

Posted by Julia Sarver at 9:56 AM No comments: