Today marks six weeks since arrived in Southern Africa. We knew we would be having adventures, and did our best to come prepared, but let’s just say there are some things you can plan for more than others.

We started off with a few days in Johannesburg visiting our friend Gavin and meeting a new friend, Matt, a friend of a friend at home. We headed into downtown Joburg to visit an open air market and have a few drinks one Sunday afternoon. We’d been so busy getting ready to leave we almost forgot what it was like to take a little break.


We walked across the street to a funky bar - and ended up getting involved in parallel parking attempt gone wrong - it was hilarious to watch several different people, including our friend Matt, try to park this woman's car.

When these two random security guys saw we were taking photos, they wanted to strike a pose, too:

After Joburg, we headed West toward Namibia, and you can see photos and our blog post on that part of our trip here: http://asaandjuliainafrica.blogspot.com/2013/07/welcome-to-namibia.html
From Fish River Canyon, we drove north through empty and desolate portions of southern Namibia. We drove hundreds of kilometers on dirt roads only seeing a few other cars each day. It was intense, and incredible, and an experience we’ll never forget.

In Sossuvlei, Namibia’s renowned sand dunes, we made friends with our neighbors, Boris and Nadja from Germany. We drove to Dune 45 to watch the sunrise with them one morning, and afterwards went to the Dead Vlei – a salt pan in the midst of the dunes.

Boris is into geocaching, and found a spot in the middle of the Dead Vlei.

After the Dead Vlei, we chose to drive around the sand dunes, and promptly got stuck:

Boris and Nadja told us about the lodge next door to the campsite at Sossuvlei was renowned for their buffet, and we headed over with them to have a buffet dinner one night. The options were spectacular, especially the game meats they had available. Our favorites were the zebra and hartebeest steaks. Yes, zebra.


On our way North to Walvis Bay and Swakopmund on the coast from Sossuvlei, we crossed the Tropic of Capricorn! Truth be told, that was the only exciting part of a long day of driving. 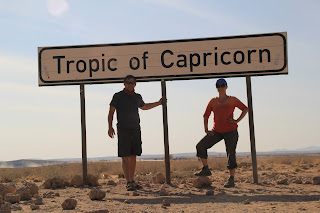 We arrived in Swakopmund on the Namibian coast on a Sunday, and the whole town was shut down (nearly 90% of Namibians are Christian), so we decided to find a place for lunch and have a nice, long, leisurely meal.

We learned the importance of making sure we really know what we’re getting when we order food in a restaurant. We wanted to order fish and chips for lunch one day (seemed appropriate as we were on the coast) only to be told that they were totally sold out. The waitress asked if we liked crawfish, and offered to bring us a crawfish plate instead. We agreed, and discovered that this was what she meant by crawfish: 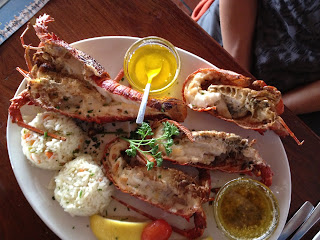 At this point, it was too late to send the 2 1/2 lobsters back, so we ordered another glass of wine and happily enjoyed our meal, trying not to notice that the price for the lobster was $450 Namibian (about $45 USD) instead of the $75 Namibian ($7.50 USD) it was supposed to be for the fish and chips.

Swakopmund is described as more German than Germany – in fact, we learned that on Adolf Hitler’s birthday the bakeries in Swakopmund celebrate by baking rolls in the shape of swastikas. (That doesn’t sound anything like the ‘real’ Germans we know!!) Before we left, we enjoyed a proper German lunch of pork roast and smoked pork, plus local Namibian beer.

On leaving Swakopmund, we opted to drive along the Skeleton Coast, which got its name because of the many shipwrecks that have happened along the coast. This one was just a few feet off the shoreline.

We’ve made friends everywhere we’ve gone – including a Namibian man named Oujan who jumped out of his truck to help when we were lowering our tire pressure to get out of the sand. He took over the project and wouldn't let us help at all, then invited us to his home for dinner (he’d caught fresh fish!) and to visit his farm in the eastern wild lands of Namibia. We weren’t able to take him up on his offer, but we’re amazed at how friendly everyone has been and how many invites we’ve had to stay with people we’ve only just met.

We would love to update more regularly, and will keep trying to connect when we can. We're currently in Botswana, and have had an incredible time here - so much wildlife and so many incredible photos to share. Our plan is to go over the border into Zambia today and spend a little time near Victoria Falls, then head east toward Malawi.

We love reading your comments and posts, so please share your thoughts with us. We’ll try to post another time this week – hoping to have more internet in Victoria Falls.

This is What Happens When You Meet A Grouchy Elephant

On one of our game drives in Etosha National Park, we had the (mis)fortune of running into a grumpy bull elephant who was annoyed with the truck in front of us. Here's the video of what happened:

We're a bit behind in posting as internet is quite sketchy and inconsistent, but we've found a hotspot at our current campsite near Maun, Botswana that has a super strong signal, so we wanted to share a post with a lot of photos for you.

One of the highlights of our time in Namibia was visiting the Etosha Pan and Etosha National Park. It's the most wildlife rich place in Namibia, and we had the chance to see huge herds of zebra, impala, and springbok along with many elephants, lions, hyena, and even a few genets.

Sundowners - enjoying a drink while watching the sunset - are a big tradition in Southern Africa. One of the campsites we stayed at within Etosha National Park was a former German fortress with a great deck for watching a sunset over the camp site water hole.


The main activity in Etosha National Park is to go out for game drives to watch wildlife, which you can do on your own or with a hired guide. We booked an evening game drive when we first arrived as that's the best way to see nocturnal hunters in action.

Our guide quickly found a pride of 8 young lions that were mostly sleeping next to a waterhole. Our neighbors in the campsite watched the same group kill an impala on their early morning game drive the next morning - needless to say, we think they got the better game drive.

We also watched a group of hyena along with very young, wobbly legged hyena babies, which were the most interesting creatures to watch of everything we saw that night. They were so cute and vulnerable, and it's incredible to think that they would grow up to be vicious hunters like their parents, so vicious that they usually just chase their prey until it's completely exhausted and collapses, and then the hyena pack starts eating it before it's dead. There's no way to explain the eery feeling you get when you hear a lion roar behind your car or hear the hyenas howling at each other - makes you realize how vulnerable you are out in the wild.

Our guide drove us to another waterhole where we saw two adult black rhino and one young one. Black rhinos are incredibly threatened in Africa due to poaching, mainly for Chinese demand for aphrodisiacs, and Etosha National Park is considered to have the healthiest population of black rhino in all of Africa.

It was tough to get photos of what we saw on our night drive, but we had plenty of time to snap pictures and watch the game during our self-guided day drives.

One part of our game drive turned out to be a little more exciting than we had planned. We had been driving among elephants for most of the day, and they had been calm and relaxed. We rounded a corner during one of our drives when we came upon this big bull who was closely inspecting the tour vehicle in front of us:

The bull wasn't happy with the silver car, and stood over it for a few minutes, looking as though he was considering whether to stomp the hell out of it or let them go. He looked around and remembered that he was also mad at the safari car, then came walking toward it, and us. We ended up being neck and neck with the safari car, chatting with the very experienced guide, as we backed up three times to let the bull know we weren't challenging his authority. He eventually let us pass, but it sure did spike our adrenaline for the day.

We also took a walk out on Etosha Pan, one of the huge, mostly dry salt lakes that make up vast parts of the landscape.


We're hoping to drive into Moremi and Chobe National Parks in the next few days. Our vehicle is giving us problems again, and we'd like to get those sorted out before heading into the wild.

Thanks to everyone who's been posting comments - it means so much to see that you're following our adventures back home and makes us feel connected.

We'll post again when we can - life is good here in Africa!